On May 16, 2917, the Seminar on China-EU Cooperation and Prospect with the theme China 2030 was held in Shanghai. President Hu Zhijian attended the seminar as an invited guest and delivered a keynote speech entitled Megatrends and Sino-EU Cooperation.

President Hu Zhijian introduced the new engine of scientific and technological innovation in China and the results of the fifth national technology foresight, and proposed key areas of China-EU innovation cooperation against this background.

This seminar is part of the second phase of the Dragon Star project, which is supported by the EU’s Horizon 2020 program and also a new China-EU cooperation project following the Seventh Framework Dragon Star project. The second phase of the project was launched in Shenzhen on February 3, 2015, with a period of three years and involving 14 institutions from China, Germany, France, Italy and other countries. The project aims to further establish an exchange and cooperation platform for China-EU science and technology policy, and provide guidance and services for Chinese and European researchers to take part in each other’s science and technology plans, in particular, China’s participation in the EU’s Horizon 2020 program. 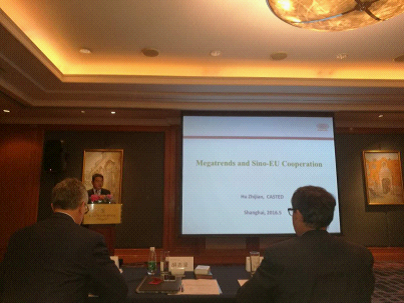