The second China-UK Innovation and Development Forum was held in London in the morning of December 6. The forum was jointly organized by the Technology and Management Center for Development of Oxford University, together with Innovate UK, China-Britain Business Council, the Institutes of Science and Development under the Chinese Academy of Sciences and the Chinese Academy of Science and Technology for Development. More than 100 Chinese and British experts and scholars on innovation attended the meeting, and discussed and exchanged views on the latest development of science, technology and innovation in China and the UK, as well as major policy issues such as a joint China-UK response to common challenges. During the meeting, President Hu Zhijian gave a keynote speech titled “China's Science and Technology Policy and Future Development”, which drew a lot of interest from the scholars. Experts and scholars attending the meeting expressed great interest in the future direction of China’s science and technology policy, and shared the view that innovation cooperation between China and the UK enjoy a broad prospect. 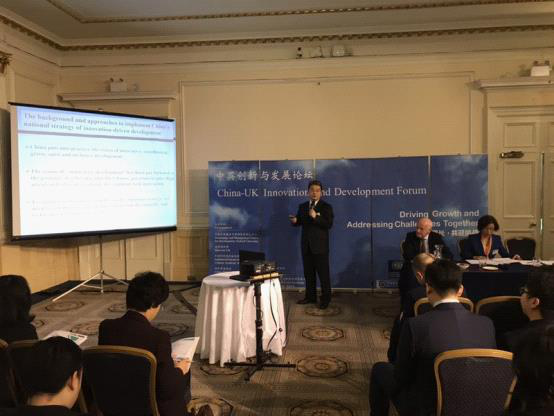 The second China-UK Science & Innovation Forum was held at the Royal Society in the afternoon of December 6. The theme of the forum was “Shaping the Golden Era Together”. Some 300 delegates from the Chinese and British governments, universities and research institutions attended the meeting. The forum was held on the occasion of the visit of Vice Premier Liu Yandong to the UK for the fifth meeting of the China-UK People-to-people Dialogue. The year 2017 marked the 45th anniversary of the establishment of ambassadorial diplomatic relations between China and the UK and the beginning of the Golden Era of China-UK relations. Vice Premier Liu Yandong delivered a keynote speech at the meeting. Secretary of the Leading Party Members’ Group and Vice Minister of the Chinese Ministry of Science and Technology Wang Zhigang, Prince Andrew and Minister of State for Universities, Science, Research and Innovation of the UK Jo Johnson attended and addressed the meeting. President Hu Zhijian, in his capacity as a member of the drafting group of the China-UK Science and Technology Innovation Cooperation Strategy, was invited to give a special report on China-UK science and innovation cooperation at the meeting. 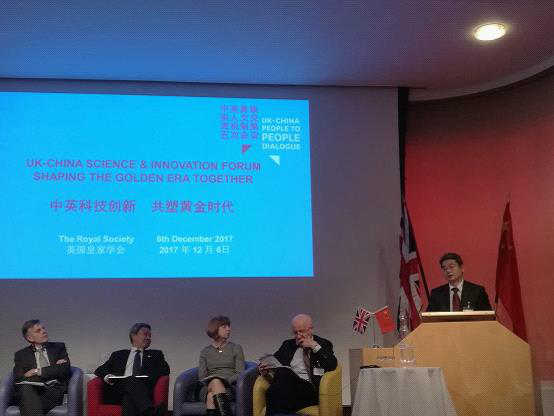 President Hu offered the following insights: China and the UK share the same goal of promoting science and innovation cooperation. China-UK cooperation enjoys broad prospects, and the catalytic effect of such cooperation can generate more contents for the development of the two countries and the world at large. In conducting science and innovation cooperation, China and the UK should build an open innovation platform, promote the building of a global partnership, pool intellectual resources from around the world, jointly study complex global issues, and provide systematic solutions to improve the well-being of mankind. The two sides should push for dialogue and exchanges between universities, research institutions and enterprises at a faster pace, discuss major policy measures concerning the strategic initiatives, major tasks, training of high-end professionals, protection of intellectual property rights, and conversion of R&D outcomes in the scientific and technological cooperation between the two countries, and create a favorable policy environment and mechanism for technological innovation in the two countries. Wang Ge from the Institute of Foresight and Evaluation and Chen Shibo from the Institute of Rural and Regional Development participated in the above two forum meetings.